I decided to review individual workouts now that I’m in the 3rd week of T25.  So you’ll get them in the order I’m doing them, hopefully making them still fresh in my head!  For now, I’ll do the Alpha workouts and then I’ll do similar posts during the Beta phase in a few weeks.

The first thing about these workouts is that it is all go for 25 minutes.  No stop time.  No breaks.  You hope that when you need a break, you switch movements.  If not, there is a modifier (Tania) so you do have options other than stopping.  Also, the workouts are 25 min including warm up, and then there is about a 3 minute cool down at the end.  So about 28 minutes.  The moves are done as a progression (which helps give you a “break”).  Then there are what Shaun T calls Break Downs where you go through the final version of each of the earlier moves back to back.

Today’s workout was Total Body Circuit.  This is the hardest one for me so far.  I have decided to wear sweatbands on my wrists next time because all of the work in plank.  I’m sweaty, with no time for a towel, and slipping everywhere!  I use a mat because my floors are already slippery and I have bad wrists.

You work every part of the body, mostly in cardio or plank movements.  Some are fun, some are hard, some are both!  During the pike progression it is amazing to feel so many parts working!  There is only one break down, which means it feels long because it’s movements from the whole time.  But the movements in this video seem to have more steps in the progressions, so it probably isn’t actually longer.

You will feel like you worked out for longer than 25 minutes!  So kick those feet up after…you deserve it! 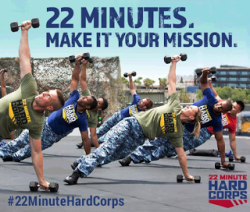